In SCOM I created several groups to group our systems together logically: each VLAN, each application type, core infrastructure, etc… I then created master groups (VLANS, Applications, etc…) to house these logical groups as sub-groups. The idea was then to create a Diagram View targeted at the master groups and display the relation of the subgroups and their associated status.

A problem arose when the rubber met the road, the diagram had additional groups that I didn’t create – groups based on health status and subgroup name. For instance, under Applications I expected to see Critical Systems, Load Balancers, Terminal Servers, etc… Instead I see Critical, Healthy, and Not Monitored. Under Healthy are 3 groups named B…E, F…S, and S…T; not until I branch open these groups do I finally see the logical groups I created.

I looked throughout the internet and couldn’t find any answers to this dilemma. It appears that once a threshold of the number of objects is reached, SCOM automatically creates groups for you even if they aren’t desired.

I remembered hearing there was additional functionality added to SCOM SP1 and began wondering if maybe this was included. I fired up a VM running SCOM RTM, imported my MP, and confirmed the groupings still occurred. I then upgraded the VM to SP1 RC and reopened the diagram view – the additional groups still remained.

Out of curiosity, I manually recreated the diagram view in SP1 and I noticed there was a new tab in the Create Diagram View dialog named Virtual Groups, hmmm… Under the Virtual Groups tab there are several options including “Do not virtually group” (selected by default). I created the group with this option turned off and viola, no more funky grouping. So there is a way to do it, can it be done in RTM? 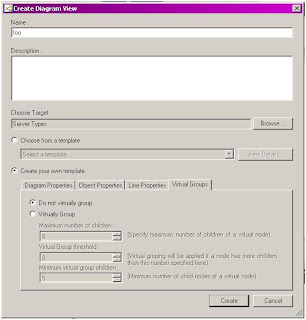 I exported the MP and compared the newly created diagram view with my prior one and found an attribute in the Diagram View configuration named ShowVirtualGroup with a value of false. I tried editing my production MP to include this attribute, but the MP failed to import due to the invalid attribute.

So it looks like I am waiting for SP1 – slated for some time in February.

Monitoring Servers based on Server Name in SCOM