Further testing with the Celerra raised the question of performance – can things be tweaked to improve performance and how does IP storage compare with FC? The scenario I am looking at is how VMware uses the NFS export as a datastore (something that isnt officially supported, yet a wizard exists to configure it).

Our Celerra will eventually be configured with a 10G Ethernet link into a Xsigo I/O Director – if your not familiar with Xsigo, check them out as there is some impressive technology there. We are waiting on parts to show up, so the current perf testing will use 2 1G Ethernet links in an Etherchannel configuration.

The test plan is:

Once the baseline performance was captured using the default profiles in IOMETER, a whitepaper from EMC called “VMware ESX Server Optimization with EMC Celerra Performance Study Technical Note” (you may need a powerlink account to access this) was used to tweak NFS performance settings. According to their performance tests: 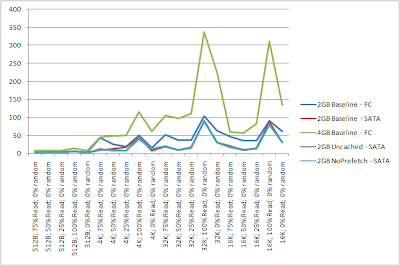 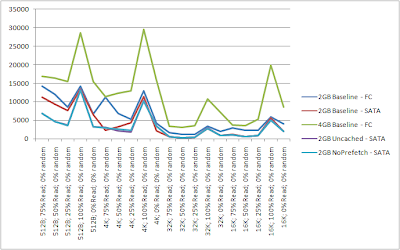 Conclusion:
While 2GB Ethernet does not match the throughput and performance of 4GB FC, it is close. I greatly expect that if this testing was done with 4GB Ethernet, the Ethernet/FC differences would be minimal, and once out 10G modules are installed that the Ethernet will outperform FC.
Additionally, at 2GB Ethernet speed, there is little difference between SATA disks and FC disks. This suggests that the bottlenec is the transport mechanism, and that more differences will be identified once the bandwidth is increased.
Lastly, there is little visible difference between the baseline configuration and the EMC best practice configuration. Some of this may be due to the workload profiles being mostly sequential instead of random, but it does suggest that the out-of-the-box configuration is fairly optimized.

Identifying the HBA WWNs in a Windows system