Skip to content
Honduras
January 31, 2013July 28, 2019 Ed Goad 0 Comments
We received a new member of the family a few days ago. A friend and fellow teacher heard us saying that we would eventually like to get a cat, and her daughter went out and found us one.
The first night, like all first nights with a new pet, was interesting. No, don’t climb the curtains. No, don’t claw the furniture. No, don’t eat our food. and so on. The next day was our first day of working at the school (prepping for classes), so we locked the cat in the bathroom with some tuna since we didn’t have anything else to feed him.
When we came home, we were shocked to see the cat was gone, and there was a hole in the screen of the bathroom window. Apparently, he didn’t like the house and decided to try it on his own. We looked all over the community for him, and asked the neighbors if they saw him, but he was gone.
The next morning we left some food outside the door to possibly encourage him to come back. When we got back from the school, the food was gone, but still no cat. We kept hearing whining and meowing outside of the house all afternoon, but still couldn’t find anything. We assumed that he had either gone back to his mom, gotten lost, or became lunch.
Sunday morning as we were getting ready for church, we suddenly heard a very distinct meowing that was him. Jana immediately ran out the door to find him running away from the house. She eventually caught up with him and brought him back home. He is now a little more timid, a little skinnier, and a lot happier to have a comfortable home.
Since he has become our own little prodigal son, we named him Lucas, because the story of the prodigal son is in the book of Luke (Luke 15:11-32) 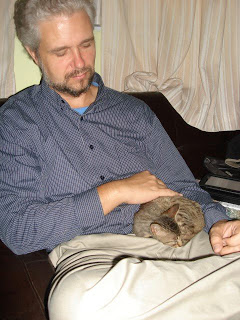 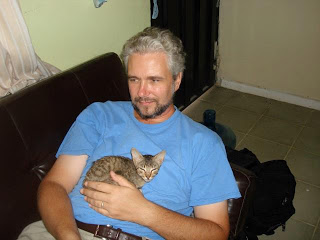 Having fun with kids in La Ceiba