We knew Saturday was going to be a busy day, we were scheduled to get our Honduran drivers licenses, then go to the bank to setup an account so we can exchange money in order to buy a car, then have the first meeting of the college group at our house.

We knew we had to get up early, so we (Jana actually) jumped up before the alarm even went off. She wanted to wash the remaining dishes from the night before, so she turned on the water and realized the water wasn’t working. She then went outside to the shed to grab the laundry and found the shed wide open – with our water pump missing. Sometime over the night someone broke into the shed and stole the pump, hmmm…. At least they were nice enough to turn off the water to the cistern before removing it (so we still have water available), but now we need to buy a new pump.
We ran around the house getting ready for our 8am appointment at the Direccion Nacional de Transito (Honduras version of the DMV). We talked with Pastor Jeony about the break-in and he mentioned that his car was broken into over the night as well. He gave us some advice on where to get a new pump and then we left for the DNT.
At the DNT we had one of the most unusual experiences. First, we had a vision and blood test. For some reason they need to know your blood type (I am A+ and Jana is O+). Then, we went to a large room full of people for the driving class. We kept wondering why there were so many adults in the class, and why the class was being sponsored by an association of taxi drivers. Before long we asked if we were in the right location – turns out we weren’t  We went down the hall to a smaller room with about 10 people and caught the second half of the class. At the end of the class was a written test that we had to pass to get our license – thankfully I brought a Spanish/English dictionary and they didn’t complain about us using it. We passed the tests and after some waiting, got our drivers licenses.
Next, we grabbed some food and headed to the hardware store. We found the new pump, and it looked exactly like the old one. Bought a new lock for the door and some bolts to secure the pump to the concrete. A quick trip through the register and we were ready to go home. We thanked Henry over and over for his help driving us and helping us find the parts we needed.
Back home, Jana starts prepping food, and I went looking for Pedro. Pedro is the local handyman / foreman for the construction teams, and he came right over to the house to install the new pump. He went out of his way to help us with the install and getting the additional piping parts necessary. Before long, his expertise got the pump secured and running, and water flowing.
While Pedro was working, we let Lucas explore outside. We wanted him to be an indoor/outdoor cat, and it was a nice and fairly calm day to let him try. Within a few minutes, he caught a mouse and ran inside the house with it – alive! Jana picked him up (with the mouse in his mouth) and put them outside. Lucas downed his catch fairly quickly and then caught another, and another, and another. We think he totaled 5 or 6 that afternoon, and he ate most of them. We now know that we have a might hunter in our midst, oddly enough, he still downed his crunchies after. 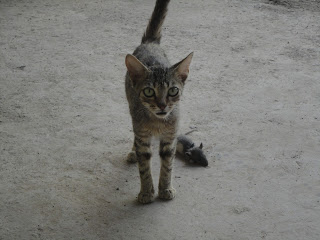 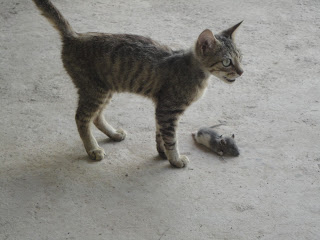 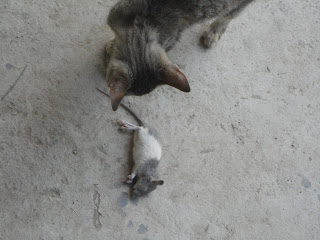 About enough time to sweep the floor and the college students began to arrive. It was our first meeting and we had no idea what to expect. We made lots of food (potato soup, wraps, cupcakes, chip/dip, etc…), thinking we could have up to 20 people, when only 10 arrived we thought we had too much. Apparently I forgot how much college students can eat, as they went through most of it. A great evening with the group, and everyone left happy and excited for more. 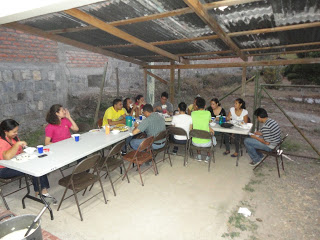 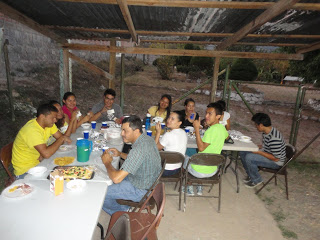 How interesting it is to rely on God