Explain the purpose, use, and benefits of APM, LTM, ASM, GTM

The F5 Big-IP system is actually composed of several separate modules, each performing a specific feature. A full list of modules can be found at https://f5.com/products/modules, however, the exam blueprint appears to focus on APM, LTM, ASM, and GTM (now BIG-IP DNS) 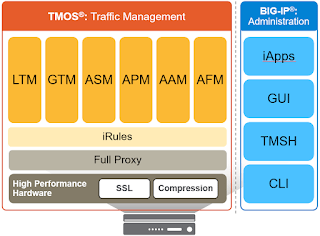 Objective 2.02: Explain the purpose, use, and advantages of iRules

Explain the purpose of iRules

An iRule is a powerful and flexible feature of BIG-IP devices based on F5’s exclusive TMOS architecture. iRules provide you with unprecedented control to directly manipulate and manage any IP application traffic. iRules utilizes an easy to learn scripting syntax and enables you to customize how you intercept, inspect, transform, and direct inbound or outbound application traffic.

Explain the advantages of iRules

iRules is a highly customized, Tcl-based scripting language that allows you complete programmatic access to the traffic on the wire. If you’re looking to inspect, analyze, modify, route, re-direct, discard, manipulate, re-play, mirror or…just about anything else you can think of, chances are you can do it with an iRule. It offers incredible flexibility and control that makes it possible to do unbelievably cool stuff with your F5 gear. iRules gives you the ability to write business logic into your network layer, and that is a powerful and liberating thing.

Given a list of situations, determine which would be appropriate for the use of iRules

Objective 2.03: Explain the purpose, use, and advantages of iApps

Explain the purpose of iApps

Explain the advantages of iApps

iApps, similar to wizards, guide the administrator through setting up of common configurations. However, unlike a wizard, iApps can be re-run multiple times to adjust or update the configurations.

Given a list of situations, determine which would be appropriate for the use of iApps

If there is an iApp appropriate for your environment, use it. The only exception might be when you wish to customize the configuration after the fact, and dont wish to lose that customization when making updates in the future.

Objective 2.04: Explain the purpose of and use cases for full proxy and packet forwarding/packet based architectures

The reason there is a distinction made between “proxy” and “full-proxy” stems from the handling of connections as they flow through the device. All proxies sit between two entities – in the Internet age almost always “client” and “server” – and mediate connections.
A full-proxy maintains two separate session tables – one on the client-side, one on the server-side. There is effectively an “air gap” isolation layer between the two internal to the proxy, one that enables focused profiles to be applied specifically to address issues peculiar to each “side” of the proxy.

Describe a packet forwarding/packet based architecture

A network device with a packet-based (or packet-by-packet) design is located in the middle of a stream of communications, but is not an endpoint for those communications; it just passes the packets through. Often a device that operates on a packet-by-packet basis does have some knowledge of the protocols flowing through it, but is far from being a real protocol endpoint. The speed of these devices is primarily based on not having to understand the entire protocol stack, short-cutting the amount of work needed to handle traffic. For example, with TCP/IP, this type of device might only understand the protocols well enough to rewrite the IP addresses and TCP ports; only about half of the entire stack.

Given a list of situations, determine which is appropriate for a full proxy / packet based architecture

Objective 2.05: Explain the advantages and configurations of high availability (HA)

When a redundant system is in active/standby mode, one unit is active, that is, accepting and processing connections on behalf of the redundant system, while the other unit is idle (that is, in a standby state).
When failover occurs, the standby unit becomes active, and it normally stays active until failover occurs again, or until you force it into a standby state. Forcing the unit into a standby state automatically causes the other system to become active again, if possible.
For example, you can configure unit 1 to process traffic for virtual servers A and B. The standby unit monitors the active unit, and if communications fail, the standby unit initiates a failover and becomes the active unit. The newly-active unit then begins processing traffic for both virtual servers.